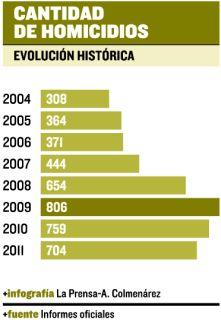 There were 704 murders in Panama in 2011, or 7.2% less (55) compared to 2010. This was announced yesterday by the Minister of Public Security Jose Raul Mulino who said this decline was achieved thanks to the joint efforts of the different security agencies of the state working together. He said 37% of these homicides are not related to organized crime, but he gave no absolute figures for the calculation of that percentage. The homicide rate per 100,000 inhabitants of 19.3 is the lowest since 2009 according Mulino, but remains above other Central American countries like Costa Rica (9) and Nicaragua (11). This rate rises to 20.6 when calculated according to 2010 census figures, based on the country’s total population of 3,405,813 people.

Mulino acknowledged an increase in simple thefts and domestic violence cases, but noted reductions in cases of robbery and personal injury. He announced this year they will continue to use the “Pele Police” handheld data system, but said the software will be upgraded to make it faster. On drugs, he reported the seizure of 40.3 tons, 14.3 tons less than in 2010, a phenomenon attributed to the fact drug traffickers have sought other routes because of the fence set up in Panama. (Prensa)